Where do I start? I hope I manage capture and show off how amazing this race is throughout this blog.

Admittedly I was seriously nervous about this race, I was super fit and healthy, but I was nervous about even completing the course. It's been a long season, and with only returning back from Oz (World 70.3 Champs) 10 days prior and mainly racing this from 70.3 training. I was super nervous about the distances alone, and how tough Ironman Wales is. But Paul Kaye bigged up the race so much at Norway 70.3, I was sold.

I’ve done an IM before in 2011, but didn’t race it. So it’s been 5 years since I’ve done anything so crazy long. However, I felt mega fit and mentally ready for the challenge ahead. A lot of athletes I spoke to said IM Wales is a very slow course, maybe to add on even an extra hour in time from other courses. It is one of the most brutal courses out there. But I thrive off of hilly courses, especially in the UK with the ‘home’ advantage.

Racing is never an individual journey. I had the most amazing support crew on race day; Bex and the fam, my fam, coach Rob and Titch. I felt extremely lucky to have this bunch supporting me. It’s impossible to write in words how much it means to have so much support from family and friends who were present and at home.

In the lead up to the race, it was quite obvious that Tenby and the local community get right behind this event. I’ve never seen crowds like it, and this was before the race had even started! The town is gorgeous, and driving around the bike course on Friday = beauty at its best. Hilly, but bloody beautiful.

It was fab to do a pre race interview with Jo Murphy and the Skechers Performance team. You can check out the interview on their Facebook page here.

WOW. Just wow. Arriving to the swim start and already the crowds were building. Music blaring from the beach start. The sea looking calm. Nervous energy everywhere. As I waved goodbye to everyone, my heart was pounding so hard. I was so nervous about even finishing the race, let alone trying to compete. I had words of advice pre race, and mainly the same word appeared. And that was PATIENCE. So … here we go…

Although the swim looked flat, it still had some chop out there. But obviously not IM Wales standard kinda chop. The female Pros started 3mins in front of the AG waves, so I knew it was going to be a busy, wavy swim. I exited on lap one, around the beach feeling comfortable, albeit a little sea sick. I was so in ore of the support I was looking around at the amazing crowds everywhere, big smile on my face. Then boom back in for another lap. 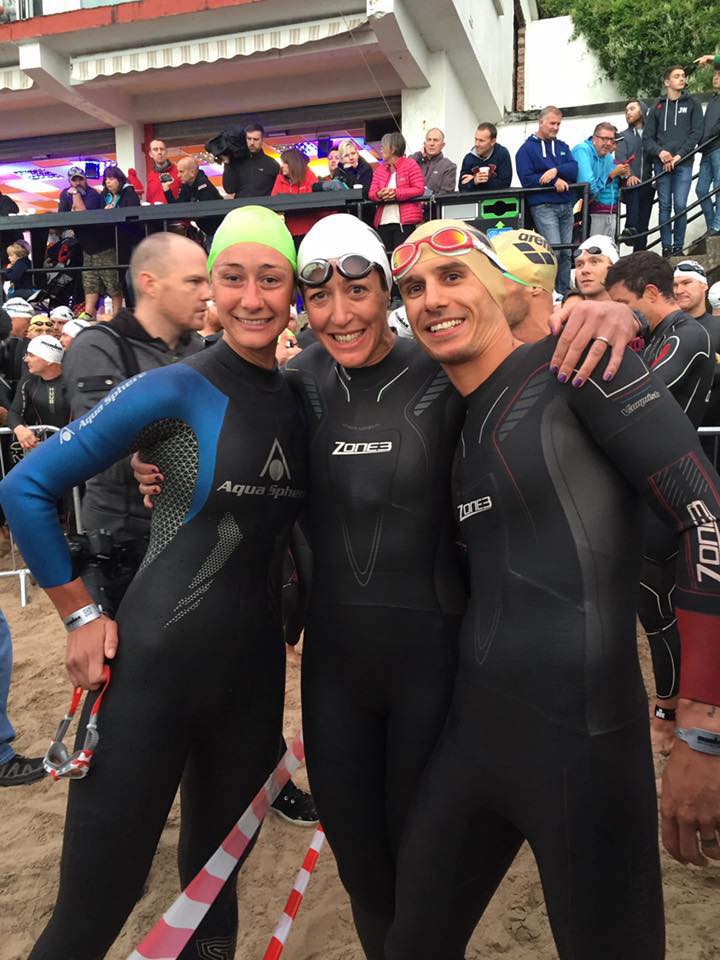 Now. IM Wales is famous for its 1k switch back, zig zag climb to T1. I was excited to get a buzz from the crowd after boshing around in the sea for nearly an hour. Wetsuit half way off then BOOM. STACKED IT. On the sand (luckily??!!!). So as I ran up head to toe in sand, the 1k went very quick to T1, managing to see all my family on the way giving them a wave. Quick T1 where I also had to get a new timing chip for some reason, and out onto the bike for a fair few hours.

With over 2,000m of climbing, and very minimal flat sections, this 180k was all about patience, keeping to a race strategy (power and nutrition for me), and soaking in the amazing scenery and energy from the crowds.

Pre race Rob gave me a clear strategy with the first big loop sticking to slightly over NP average for the ride, then dropping this wattage slightly for the last couple of hours. Honestly, I was extremely nervous about actually racing the bike section for such a long period of time on this relentless course. So I just soaked up the atmosphere to the max and this certainly helped.

I felt pretty comfortable in the first 2-2.5hours then my stomach was not playing ball, so decided to take an hour off of eating and just sticking to water/electrolytes. This seemed to work a treat and then I was back to eating every 30mins. Then for some reason in the last hour I took 4 gels – one every 15mins. Don’t know where this sudden thought came from. Love how random ideas enter your head.

Back to the course… WOW!!! Hilly, beautiful, never in my life have I seen so many spectators. People bringing out loud speakers, others bringing their sofas out to sit on for the day. 12-16% climbs (lots of them!). The best climb was Saundersfoot. My goodness…it really was like The Tour de France. I couldn’t help but beam a massive smile for a couple of miles whilst climbing. I had waited for about 107k to see my awesome support crowd, and here they were buzzing in the atmosphere. Seriously. By far the best-supported bike ride I’ve ever seen. 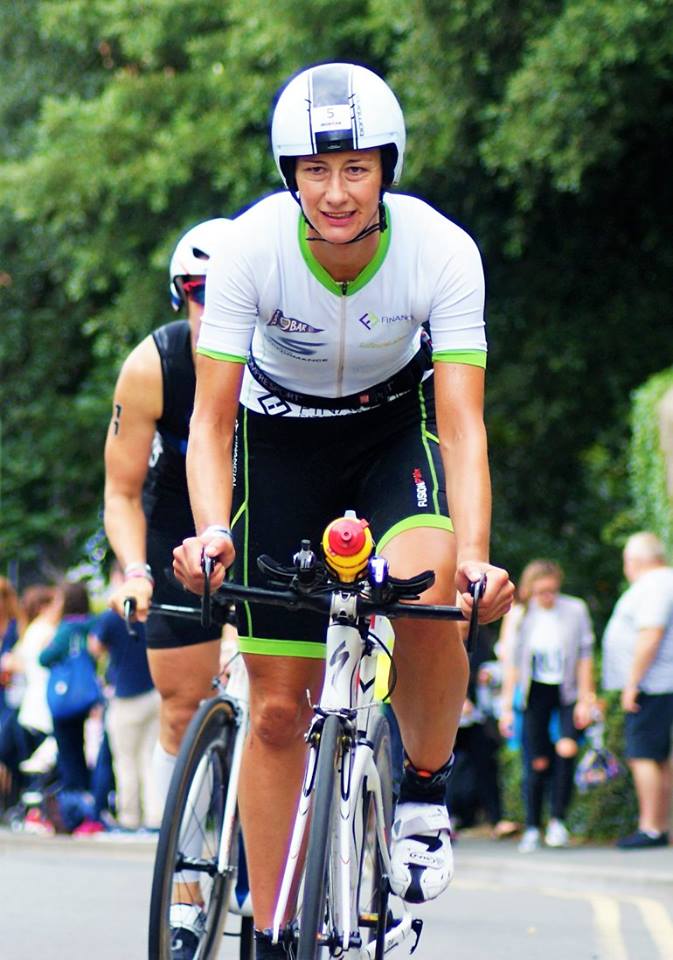 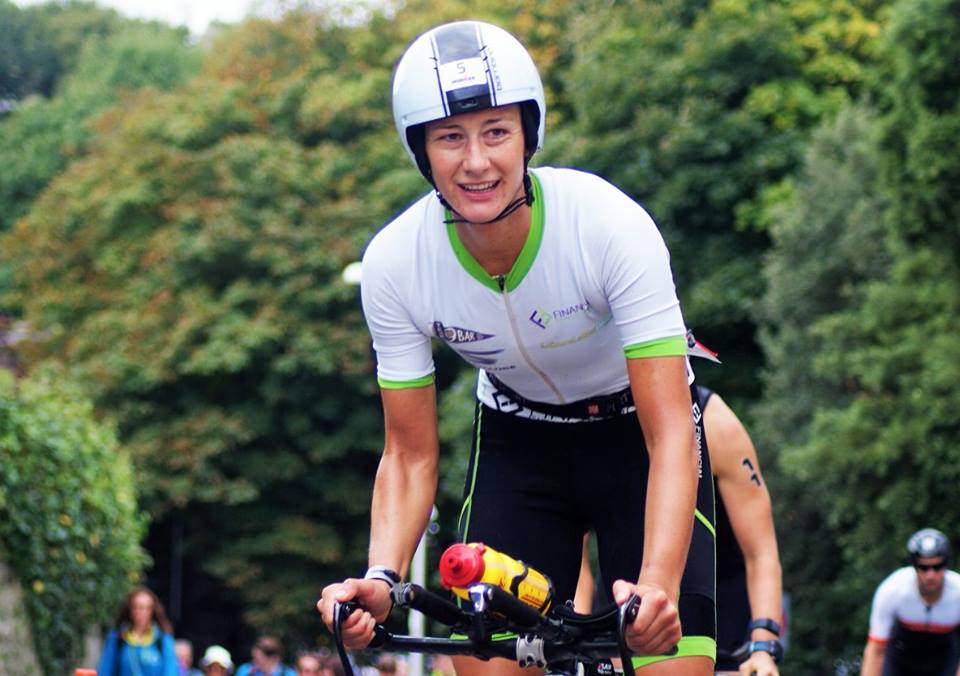 Coming off of the bike in 4th, I made sure I didn’t get carried away and leg it out of T2. I got fully changed into mega comfortable clothing, ready to take on my longest toughest run in about 5 years. Here goes…

OH MY GOODNESS. I thought the bike was STACKED with supporters, but my word the run course. EPIC. Again, crowds 3/4 deep, shouting your name, giving off positive vibes. After around 100m from leaving T1, you hit the long ass 3mile climb. And my goodness, this was KILLER. 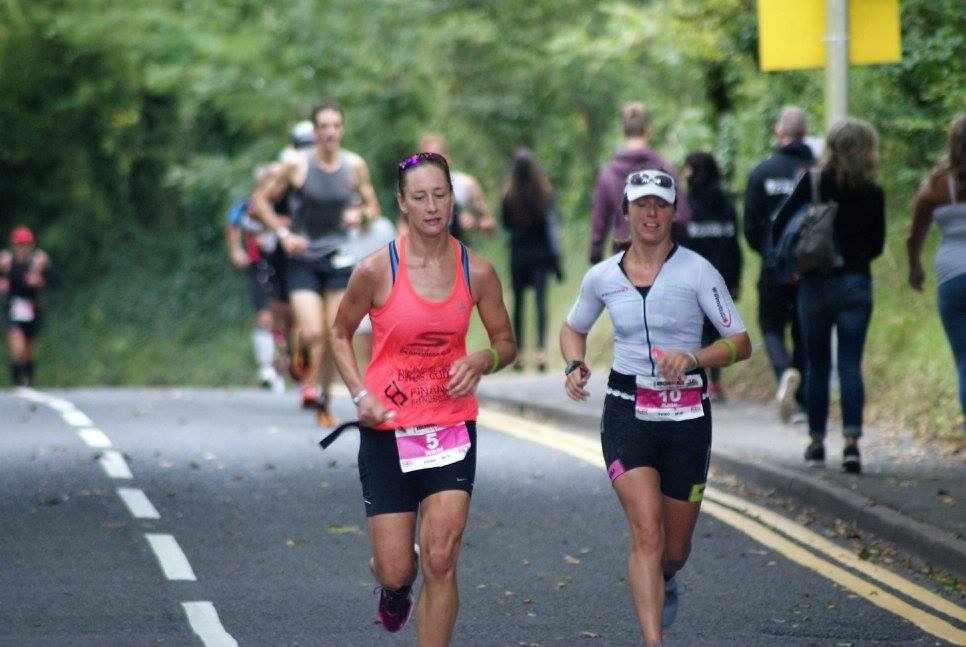 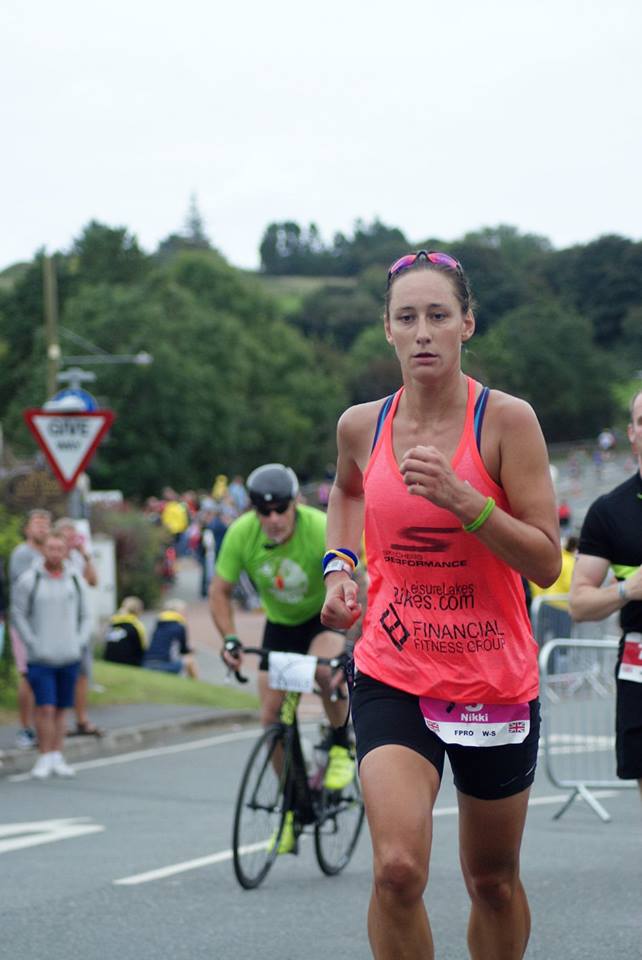 The run course takes the biscuit in terms of how hard it is. It’s literally one big 3mile climb out, then back down, and approx 1.5miles around the twisty turny undulating town, run PAST the finish line (cruel but epic), and x 4 loops to make a very accurate marathon.

I actually decided this wasn’t a course for a watch, after some good advice. Who wants to see depressing splits whilst running up a steep 3mile climb. No thanks ;). I was told to jog out the first loop, which I did, and felt surprisingly good. WAY better than coming off the bike at the Worlds 70.3. But then, on the second loop everything went to pieces. Still running in 4th but losing time on the top 3. I was seriously contemplating the ‘you can pull out here’ options… I,e just walk into the arms of my amaze supporters. I hit the wall. Not epically, but I smacked something in the face.

I tried to focus on the processes, listened to my race plan from Rob (literally in this photo) – took on nutrition, head down, focus on cadence / just moving. I got back into town on my 2nd loop, knowing this was ONLY HALF WAY. Seriously could have cried. Not with joy this time. I saw Bex just as I was approaching the climb for the third time. I wanted to stop and cry. She shouted very basic but effective advice, cadence, be strong up the hill, head down. I did just that and from absolutely no where, suddenly, I found my second wind. Maybe literally as I was DESPERATE for the toilet. One and two.

I started catching third, the time came down from 6mins to 4mins. I could hear my fan, friends, support crowd and Tom shout how close the gap was becoming. Near the end of the 3rd loop this came down to 2mins. As I passed Diana Reisler for third spot, coming into the 4th loop, somehow, somewhere, I never looked back and ran my heart out for the last 10.3 (or so) K’s. Soaking in the crowds, full on high-5s (not the half hearted ones I was giving out in loop 2).

I couldn’t believe I was going to podium in my first Ironman. BUT, at the top of the climb, there’s probably still around 6k to go. I could still blow. So I kept taking on fluids and just buzzed myself from the crowds and amaze support from Rob and family.

Run: 3.22. Highly advise listening to your body and not taking a watch on that course. The hardest run course I’ve ever faced.

Coming down the finish line…

How do you even begin to describe this feeling? It truly is the magic carpet. The 10.09 hours of racing tiredness suddenly became non-existent. You seem to find this energy that you haven’t seen all day. You look for your family amongst the crowds, but it’s impossible to see them with the cheers, hundreds of faces smiling and screaming. I had emotions everywhere. So lucky I saw Bex, right by the finish line to give a kiss and cuddle.

I turned to the crowd and waved a massive thank you. I walked across the line, in 3rd place, unbelievable. It still hasn’t sunk in whilst writing this.

How do I even thank the amazing people who were there behind the scenes to produce this result, and those who were with me on the day! Saying ‘thank you’ doesn’t begin to describe my appreciation.

My first shout out is to Rob, for looking at my previous performances and seeing something there. To then creating a year of results that I wouldn’t have imagined was possible in Jan 2016. If you were to write down a list of ‘needs and wants’ from a coach, Rob ticks them all and beyond. I’m actually getting emotional writing this as it means the world to me to have his, and Susie’s support, they’ve transformed my performances and mindset, and I cannot begin to express my appreciation.

To Bex, family (extended but I count you as family), friends, sponsors. The amount of messages I’ve received is amazing. One of my favorites is from a spectator who private messaged me on my Facebook page, to say she watched me come through (with credit to her for some of these photos), to say she has now signed up for a running club, after being inspired. Amazing.

Paul Kaye you were right. Tenby – IRONMAN Wales, is a must do event. Obviously NOT for a PB time, but for the beautiful town, location and atmosphere it creates. I will never forget this race and hope to be back here very soon. The commentary makes this event so so special, to you, the organization team and volunteers, thank you!

A massive thank you Tenby. Massive congrats to all athletes who raced, hope you’re now eating your body weight in food. I thought post 70.3 racing I was hungry, this is a whole new level.

My sponsors who have been my rock;

Starting out as a Pro is unbelievably tough. You guys above allow this to happen. 4 x podiums and a World 70.3 Champs = epic. Now for an end of season break. 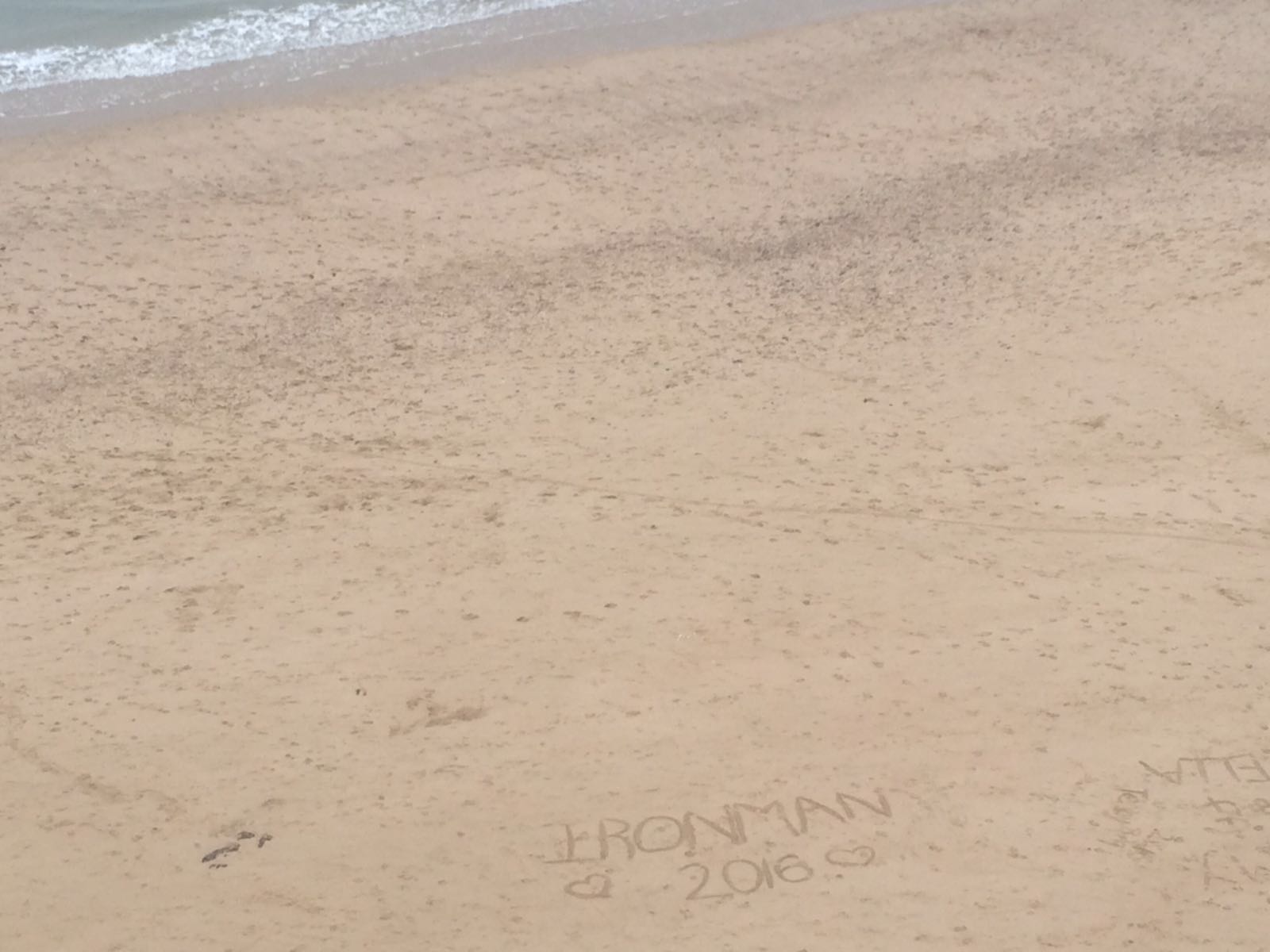 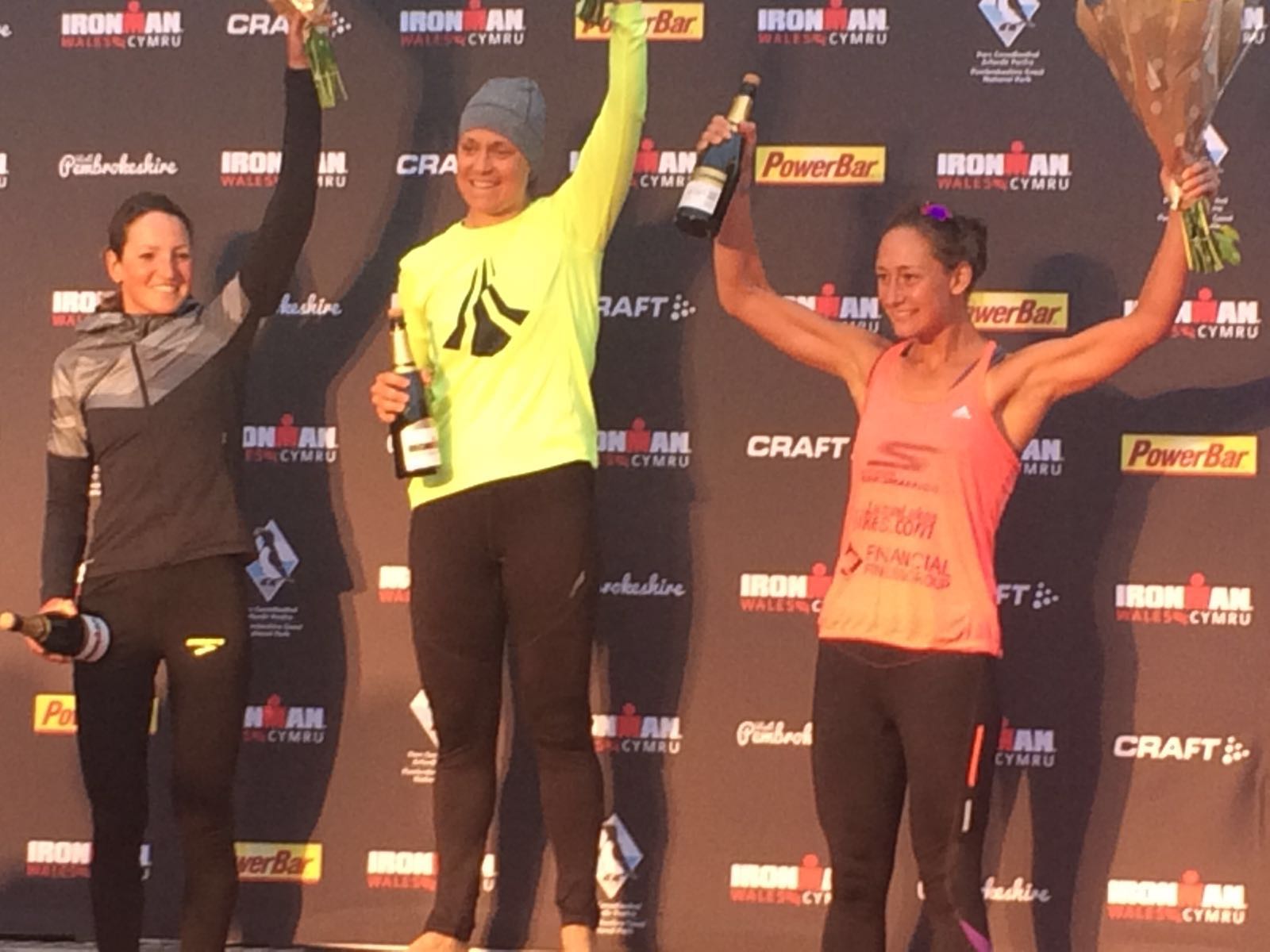